You may be wondering whether lights that use LED technology can be utilized in agricultural applications. The short answer is yes, and farmers and gardeners as well as businesses are using their power to generate profits and more. 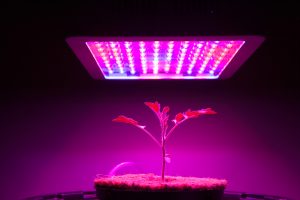 It is a well known fact that the idea of the LED light is more than just a concept. It’s been a long time since technological lights such as these crossed over the threshold and went from big invention to staple of the everyday mainstream. These days, you can find them anywhere that you look. They can be found in commercial settings, in malls, showrooms, and classrooms, among other things.

These days, they can also be located in agriculture. Whether this means vertical farms that are on the cutting edge or production of poultry, it can’t be denied that the industry’s quickly growing accustomed to how these lights can help further advances in science and also generate profit or help protect the all-important bottom line.

A Research & Markets forecast projected that the grow light market in the LED field should rise to be nearly two billion by the year 2020. Inherently, these types of lights put out a narrow band spectrum. Fluorescent or even high-pressure sodium lamps can give you an entire spectrum where LEDs allow you to fine tune and customize what you would like the spectrum to put out, so you can tailor it to meet the purpose without any trouble at all.

You can even alter the way that the LEDs put out light so that you’re stimulating the process of photosynthesis. This could urge plants to grow quicker than they were before. Scientists have found that the red and the blue spectrum work the best when it comes to photosynthesis. Since they can only be designed with red and blue lighting, they are even more efficient than another traditional source of light would be.

You can even tune the LED lights to be at a certain wavelength that could even change the chemistry/shape of a plant, fooling it into believing it is in the sun or the shade. This lets you cultivate a plant’s special chemical signature that you could not get by putting them outside. In a sense, you can now make ‘designer’ plants that could grow differently or even taste different, accentuating certain flavors over others.

Researchers are also studying how a LED light treatment could potentially be helpful when it comes to getting pests to think that it is the night time. These don’t just include insects but culprits such as powdery mildew, which would have grown accustomed to the UV rates of the daytime but might be more vulnerable to them at night. As a result, a lot of things that are pestering plants may end up being addressed through LEDs.

LEDs are being used in agriculture more than ever before. Could it be right for you?