A Breakthrough in Battery Storage

Previous Next
A Breakthrough in Battery Storage

Most of the electricity we use in our homes, schools and offices are transmitted via the grid. However, grid power is not convenient to all, and some owners of large housing complexes, institutions, and malls prefer to generate their own power via an on-site microgrid.

While most people prefer renewable power sources, the truth is that they are not always reliable. For one, the sun only shines for a few hours per day, and the wind isn’t always blowing throughout the day. Consequently, people who have renewable power facilities often find themselves depending on their local grid or lithium-ion batteries, which are not cheap. 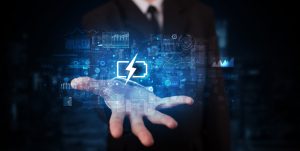 In 2017, UniEnergy Technology co-founder, Z. Gary Wang, appeared on IEE’s Spectrum Magazine November Edition with an article titled “The Biggest Thing in Battery Technology”. Therein, Dr Wang announced that he, in conjunction with the Pacific Northwest National Lab (PNNL), had finished working on a new type of battery called the Vanadium Redoxflow Battery (VRB). The battery stores power with absolute efficiency when the demand at a site is low.

The largest VRB project – with a capacity of 200 megawatts and storage capacity of 800 Mwh – is currently being built in Dalian, China. At the moment VRB’s use is limited to only 11 countries, with the Dalian-based Third Generation VRB as the biggest of all, both in terms of size and capacity.

Some of the advantages of using VRBs in your microgrid include:

Admittedly, VRBs are not perfect, and have one key weakness – their efficiency is inhibited by the fact that they keep power in the form of chemical energy. To convert this to electricity, they need to move a liquid electrolyte from a storage tank to a cell, which may take some time. This makes VRBs currently unsuitable for use in vehicles, but that will probably change in a few years.

Through the use of LEDs and vacancy and daylight harvesting controls, we have been able to reduce the amount of energy needed to light up new buildings. Before, the required capacity was 6 watts per sq ft, while now, 1 watt per sq feet is good enough, and it is also in line with most local energy codes.

Lighting experts are concerned about the possible CVS/Aetna merger. While there are many walk-in medical clinics for outpatient care that have been opened in department stores and supermarkets, we are curious to see what lighting changes will be made to accommodate them. This is because, unlike other stalls in these supermarkets and malls that use HID or cool fluorescent lamps, clinics need to have warm-coloured lighting. This is especially helpful in calming patients down and determining accurate wound and skin color.